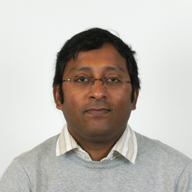 Abstract: The study of spintronics materials such as diluted magnetic semiconductor (DMSs), multiferroic and half-metallic alloys is one of the most attractive fields in science from the viewpoints of both academic research and applications. In order to clarify the origin of ferromagnetism of these spintronics, it is necessary to investigate the electronic structure. Here, we have investigated the electronic structure of spintronics materials i.e. multiferroic materials (e.g. BiFeO3) using x-ray absorption spectroscopy (XAS) and x-ray magnetic circular dichroism (XMCD).
The first discovery of room-temperature ferromagnetism in Co-doped TiO2 by Matsumoto et al. has arisen great interest in the search for such materials and a number of studies have been carried-out to investigate whether the ferromagnetism is carrier-mediated or not, but the issue still remains controversial. XMCD at the Co 2? → 3? absorption (Co ?2,3) edge is an ideal technique to clarify this issue because it is an element-specific magnetic probe. Our previous XMCD study has revealed that the ferromagnetism is not due to segregated Co metal clusters but is due to Co2+ ions in the TiO2 matrix. However, the XMCD signal intensities were an order of magnitude lower than that expected from the bulk magnetization. We performed XAS and XMCD studies on rutile Co-doped TiO2 by the surface-sensitive total electron yield (TEY) mode and the bulk-sensitive total fluorescence yield (TFY) mode and found that Co ions in the bulk indeed have a large moment of 0.8-2.2 ?? /Co. Then we extended the same approach to anatase Co-doped TiO2 and studied the correlation between magnetism and transport properties.


Biography: Dr. Vijay Raj Singh is an associate professor in the Department of Physics at the Central University of South Bihar Gaya, where he leads the Electronic Materials Group. His interests are in study of electronic and magnetic materials of functional oxide films and artificially designed structures. Dr. Singh was awarded the highly competitive Early Career Research Award by SERB and UGC in 2018 and 2017, respectively. Dr. Singh has received fellowships including the Shyama Prasad Mukherjee (2006), Sao Paulo Research Foundation Fellowship (2011), Japan Society for the Promotion of Science (2014), Humboldt Research 2014 and Marie Curie (2014) but not availed.
Dr. Singh has (co)-authored more than 50 peer-reviewed international publications, mostly in PRB and given more than 50 invited talks and colloquiums.
Dr. Singh received a MS degree in Materials Science and Engineering from Indian Institute of Technology (IIT) Kanpur in India (2008) and a PhD degree in Physics from the University of Tokyo, Japan (2011). From 2011-2016, he was research scientist at University of Nebraska-Lincoln, Boston University and MIT in collaboration with Lawrence Berkeley National Laboratory at USA. From 2016-19, He was Assistant Professor at the Central University of Kashmir, Srinagar and was recently moved to the associate professor at Central University of South Bihar Gaya.